Last Night on the ‘Red Table Talk’: The Cast of the ‘Girls Trip’, plus Queen Latifah Reveals Her Secret Celebrity Crush! 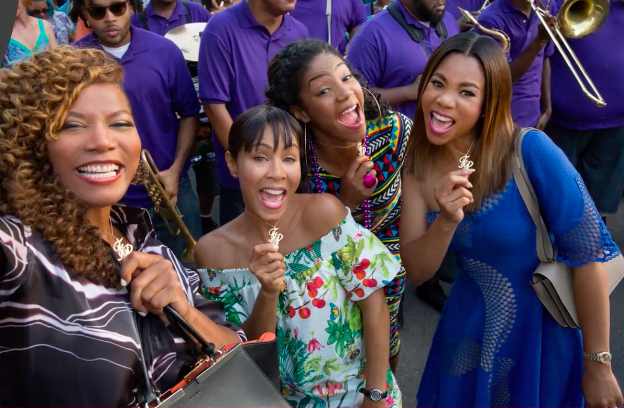 Have you ever wondered who your favorite celebrities crush on? Are they the same as yours? I mean if you think about it, they are people just like you and I–surely they are bound to be crushing on some of the celebrities you like, too!

Well last night on Facebook’s highly viewed talk show, Red Table Talk, viewers were given an intimate conversation with the cast and stars of the previously released feature film, Girls Trip (2017). In superb fashion via Zoom (an extremely popular group video chat service), Regina Hall, Tiffany Haddish, and Queen Latifah all graced our screens to discuss celebrity crushes, staying busy during quarantine, and of course, updating us with their lives after filming Girls Trip.

Jada Pinkett Smith hosted solo, although she is normally accompanied by her mother, Adrienne Banfield-Norris and daughter, Willow Smith. The show was intended to be a break from the more usually pressing social and cultural issues, and intended to be an episode rooted in laughter and comedic relief.

The Flossy Posse is definitely in the house!

As far as staying busy during the quarantine, most of the women seem to be doing just fine. Tiffany Haddish has been learning how to play video games, increasing her flexibility by doing the splits, and staying social by video chatting men on Bumblebee (an app that lets you connect to others via video chat); and speaking of video chatting men, the topic of celebrity crushes came to be and finally some secrets were revealed!

Tiffany Haddish revealed her celebrity crush to be Yankees outfielder number twenty-seven, Giancarlo Stanton, along with Henry Cavill (specifically as the Witcher), and Meryl Streep.

Regina Hall named California’s Governor Gavin Newsom as her crush; as well as the Dalai Lama (who she managed to kiss on the cheek). While Jada Pinkett Smith named New York Governor Andrew Cuomo. Saying she never misses a press conference.

If you have not already, make sure to watch the hilarious episode on Facebook now!

Jada is joined by her Girls Trip co-stars: Regina Hall , Tiffany Haddish and Queen Latifah for a laugh-filled reunion which won’t disappoint. In tough times you just need to laugh with your BFF’s!