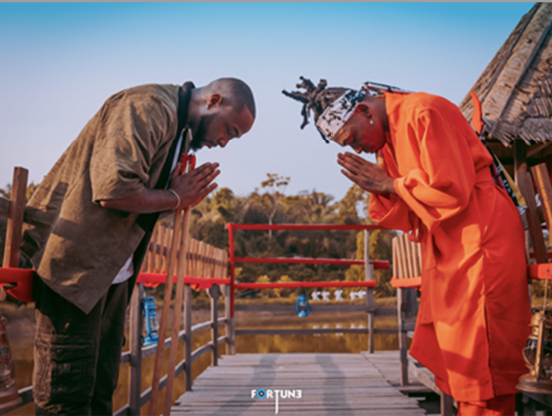 “THE BEST” FT. MAYORKUN FEATURED ON

Directed by frequent collaborator Dammy Twitch, “The Best” nods to the iconic 1984 film “The Karate Kid.”With Davido starring as the ‘Sensei,’ Mayorkun as the ‘Karate Kid’ and a guest appearance from afro-pop star Wande Coal, we see the idyllic fields transformed into a training ground of all Davido’s students learning how to become ‘The Best’ from the best.

Closing 2020 with the momentous release of A BETTER TIME, which is fast approaching a staggering 400M combined streams across all platforms and 32 million views across the official videos; Davido continues to cement himself as one of the biggest artists in Africa. The album dominated the No.1 position in the Apple Music charts across 8 territories, including Nigeria, where it maintained this spot for 4 consecutive weeks.

Born in Atlanta, Georgia and raised in Nigeria, 27-year-old Davido (real name David Adedeji Adeleke) has been a champion for the continent of Africa. He chose to chase his music dreams and whilst doing so earned over 30 awards including a MOBO for Best African Act, MTV EMA for Best International Act, three MTV Africa Music Awards, two BET Awards and two Nigerian Teen Choice Awards for “Top Featured Artist” and “Choice Male Artist.”

With an unmatched work rate, Davido has delivered back to back hits since his musical debut in 2011. Breaking out with successive singles “Back When,” “Dami Duro,”  “Gobe,” “Aye” and “Skelewu,” the latter would enjoy attention from Major Lazer and Wiwek who went on to remix the single. His musical elevation would see further global collaborations with Chris Brown, Pop Smoke, Summer Walker, Young Thug, Mayorkun and more.Davido kick-started last year with a sold-out date at London’s prestigious O2 Arena, becoming the first solo African artist to do this. He created waves across America with his smash hit single “Fall” which is certified gold in the US and in Canada.

With a discography attesting to over a billion global streams and 400 million video views, the Afrobeats forerunner has very much established himself as a force to be reckoned with.