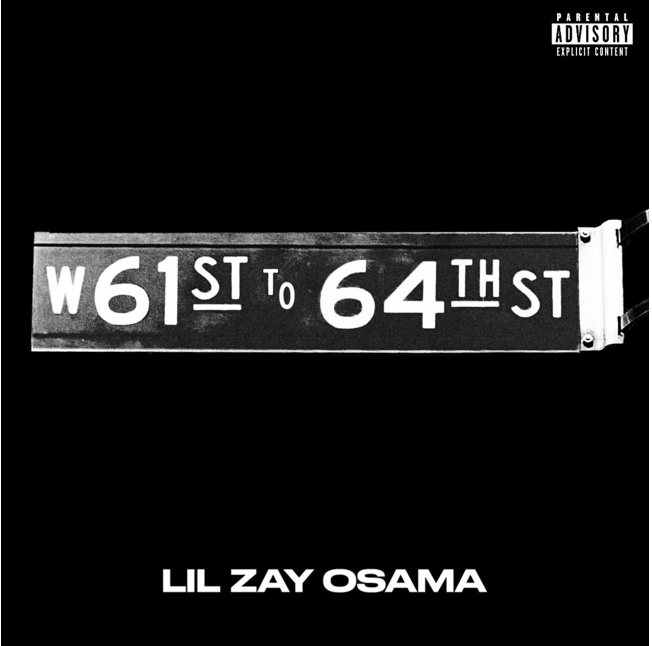 MIXTAPE FOR FEBRUARY 19TH ON WARNER RECORDS
NEW SONG AND VIDEO FOR “61ST TO 64TH” OUT NOW
LISTEN HERE – WATCH HERE
Lil Zay Osama is starting the year off strong as he announces his forthcoming project Trench Baby, set for release on February 19th, with a new song and video titled “61st to 64th” on Warner Records. With Chicago on his back, Zay has been building momentum over the past several months, dropping new heat, including “Loyalty,” “Rumors” and “Ride For Me” feat. Jackyboy, and amassing millions of streams. The new “61st to 64th” track sheds light on the harsh nature of the specific Chicago streets where Zay made his name. Vividly describing it as if you were riding in the passenger seat as Zay drives through the hood, he raps, “61st to 64th, ain’t nobody on that porch / Everybody got a 30, everybody trying to score.”

Trench Baby finds Zay returning to and refining the pain music that’s made him one of the most affecting storytellers in rap. The struggle that he so magnificently captured in his music and visuals when he first arrived is what he set out to encapsulate on the forthcoming project. Zay waxes poetic on grief, trauma and romantic heartbreak as much as he articulates the joy of survival. His mindset is to give fans “the real me again, so they feel it in their heart,” as he puts it. Stay tuned.

ABOUT LIL ZAY OSAMA:
Lil Zay Osama makes “pain music.” That’s what the South Side native calls his combination of raw, gripping lyrics and a passionate delivery. One of Chicago’s most captivating young voices, the 23-year-old pens heart-wrenching street narratives riddled with eulogies for tragically lost family and friends. Throughout 2020, Zay has touched fans with singles like “Loyalty,” which encapsulates the emotional impact of his heaviest songs. In one half-sung couplet, he distills the callousness of Chicago street life. One of six children born to a single mother, Zay employed every hustle available to him growing up—selling newspapers, playing bucket drums, illicit grinds—to provide for himself and his family. But though Zay was in the street early, he was in the studio well before. By the time he was a teen, he was a budding star in the early 2010s Chicago drill scene alongside compatriots like Chief Keef. Zay dropped his celebrated and celebratory Hood Bible (2019) while glowing from signing to Warner Records, but his forthcoming project Trench Baby takes a different tack. He captures grief, trauma, and romantic heartbreak as much as he articulates the joy of survival.
FOLLOW LIL ZAY OSAMA:
Instagram | Twitter | YouTube