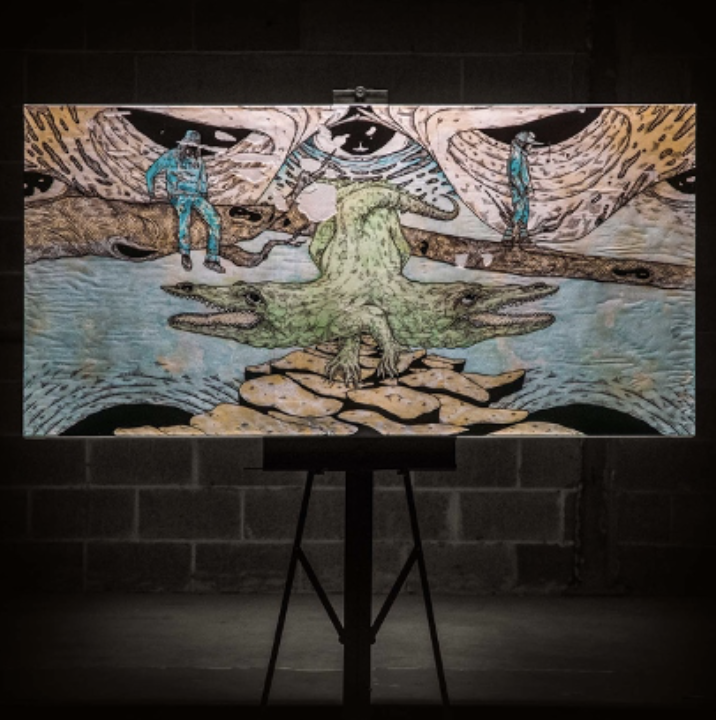 ROLLING STONE 2021 ‘ARTIST TO WATCH’ TEDDY SWIMS PROMISES TO WAIT “TIL I CHANGE YOUR MIND”
ON NEW SINGLE – HERE
COLLABORATES WITH RISING ATLANTA VISUAL ARTIST SAGE GUILLORY ON VISUALS AND LAUNCHES AUCTION TO BENEFIT LOCAL ORGANIZATION SOUL FOOD CYPHER
ANNOUNCES FIRST GRAPHIC NOVEL TEDDY SWIMS: SWIMMY AND THE VALLEY OF THE LAST SONG OUT THIS FALL
DEBUT EP TO BE RELEASED LATER THIS YEAR
Emerging as one of the year’s hottest rising stars, ace Atlanta singer/songwriter Teddy Swimsuncovers a new single with a personal and powerful message called “Til I Change Your Mind,” out today via Warner Records. Get it HERE and watch the visualizer HERE.
For the accompanying cover artwork, Teddy recruited buzzing Atlanta visual artist, illustrator, creative director, and painter Sage Guillory to create a custom psychedelic painting by hand. The visualizer for “Till I Change Your Mind” spotlights the birth of the artwork.An in-demand presence, everyone from Sprite and Target to Adidas has commissioned Sage’s work recently.
Sage said, “This piece is about unity. I drew inspiration from the ‘Siamese Crocodile,’ a Ghanaian Adinkra symbol which depicts two conjoined crocodiles—a usually independent animal now forced to unite in order to survive. Which I believe is what we have to do in today’s world in order to protect, and most of all respect one another. Compassion is represented in this piece by the color blue. These crocodiles are existing and thriving in an ever expanding sea of compassion, love, and understanding.”
Additionally, Teddy decided to give back in a big way and will auction off the original painting with 80% of the proceeds to benefit Soul Food Cypher (SFC), an Atlanta non-profit organization that utilizes freestyle rap and lyricism to transform individuals and communities. The remaining 20% will be given to Sage in order to fund the construction of a new studio. Teddy is also auctioning a 45-minute one-on-one Zoom concert with 100% of proceeds supporting SFC. Information on the auction can be found HERE.
Regarding the song, Teddy commented, “So many people have platforms these days but don’t use them to say anything, so I wanted to use mine to say something. I’ve always said that I’ve wanted my music to spread love unity and be a positive force. I wrote ‘Til I Change Your Mind’ a few months into the Covid lockdowns and shortly after the nationwide Black Lives Matter protests last year. This song really captures my frustrations with the racism I see by living in the south. So many people want to act like everything is fine, when in reality, our brothers and sisters are dying in the streets by the hands of police officers everyday.  This song is written for the people that aren’t directly affected by racism and don’t recognize its prevalence today. I hope someday to open their eyes and change their minds.”
The song arrives on the heels of the acclaimed “My Bad.” In addition to naming him a 2021 “Artist To Watch,” Rolling Stone praised how “A boundaryless approach comes through in Dimsdale’s original songs, which blend elements of hip-hop, R&B, country, and classic soul.”  He also made his national television debut on NBC’s The Kelly Clarkson Show with an unforgettable performance of “My Bad.” Watch it HERE.
In other big news, he just revealed his upcoming debut graphic novel, Teddy Swims: Swimmy and the Valley of the Last Song, with Z2 Comics set for release this fall. It portrays an imaginative adventure through the lens of Swimmy The Teddy Bear, presenting Teddy and his bandmates like audiences have never seen them before!
Everything paves the way for his forthcoming first EP due out later this year.
To cap off a breakthrough 2020, Teddy enlisted Country star Thomas Rhett to feature on a new version of his hit “Broke.” Inciting critical applause, Billboard described it as “Guaranteed to make you smile and tap your toes at the same time. A winning combination.” The original “Broke”—Teddy’s second original release—earned raves from the likes of Idolator, Flaunt, and American Songwriter, the latter of which praised Teddy’s “honest, emotional” sentiments. Music critic Bob Lefsetz was similarly wowed by “Broke,” writing, “I’d say it’s a one listen smash, but that’s not an accurate description, IT’S A FIFTEEN SECOND SMASH!”). Teddy got his start by posting covers on YouTube out of his bedroom. His bold voice immediately resonated as he impressively attracted an audience of 1.7 million through a steady stream of both hilarious and heartfelt moments.