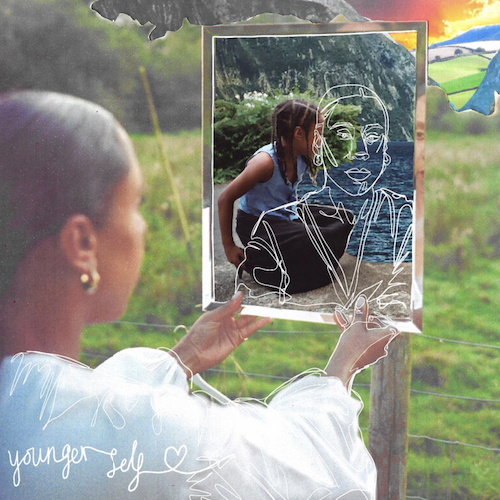 LISTEN HERE // WATCH HERE
UPCOMING UK TOUR SUPPORTING MAVERICK SABRE
Breakthrough UK soul singer-songwriter Mychelle today shares her reflective new single “Younger Self” available to stream across all digital streaming platforms via The Orchard.
An introspective and sentimental slow burner, the song sees the artist singing to herself as a child over gentle acoustic guitar, before it blossoms with strings and harmonies. “Younger Self” arrives accompanied by an animated video, and is her first release since last year’s debut EP, Closure.
STREAM HERE // WATCH HERE
On the track, Mychelle says: “I wrote ‘Younger Self’ on my guitar at home. It is a song where I am literally talking to my younger self and helping me navigate my way through Love.”
Born and raised in Hackney, Mychelle first picked up a guitar aged 10, but put it back down again shortly after, before returning to the instrument at 17, when she quickly began making a name for herself busking around the capital.
In 2019 she was spotted by Idris Elba who invited her to his studio to write and sing on his Yardie Mixtape project, the soundtrack to his directorial film debut of the same name. 2021 saw Mychelle release her stunning debut EP, Closure. It was named BBC Radio 1Xtra host Jamz Supernova’s No. 5 EP of the year, which celebrates the world of future R&B, and she went on to perform an intimate rendition of ‘Life Isn’t’ on Tonight With Target.
Mychelle is part of FAMM is a management company and label which independently releases music from award-winning recording artist Jorja Smith, Maverick Sabre, and rising star ENNY.
Listen to “Younger Self”
Pivot Link
Watch “Younger Self” (Animated Video)
YouTube
Follow Mychelle
Instagram
Twitter
YouTube
Facebook
Spotify
TikTok