TDE Hits Fans With Another Drop By Punch

ON: May 4, 2020 BY: Alex Bonet 0 COMMENT STORIES
entertainment music 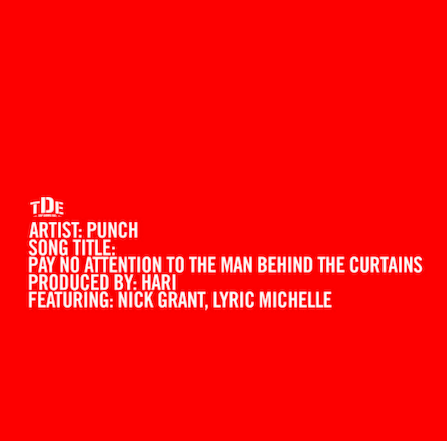 In honor of the recent Top Dawg Entertainment ‘Fan Appreciation Week’, the label’s president and hidden secret rapper Punch, has joined his crew and released a new single titled, ‘Pay No Attention to the Man Behind the Curtains’.

Originally located and based in Carson, California–the independent record label is home to a high volume of high performing artists such as Kendrick Lamar, Ab-Soul, Schoolboy Q, SZA, and even Isaiah Rashad (to name a few). The label has built quite the name for themselves, by delivering and producing extremely high quality content, whilst maintaining a relatively low profile.

No seriously, it is a blessing to get a release from any of their artists, and to be honest, I’m not mad at them.

Recently, the West Coast label has released a stream of tracks from a variety of their artists in favor of their self titled, ‘TDE Fan Appreciation Week’. As the week progressed, artists such as Ab-Soul, Isaiah Rashad, Reason, Zacari, and Lance Skiiiwalker released a number of tracks which were received very well by fans; and this week, their president Punch has hit us with another one.

The single, which is just barely over 4 minutes, describes what it is like to be the man holding all the power, but behind the curtains.