You Need to Watch ‘Kill Chain’ on HBO 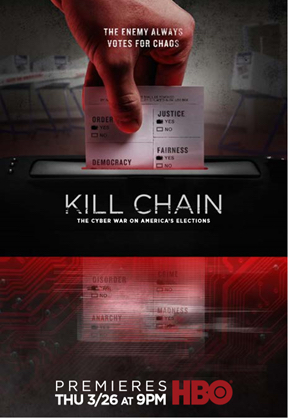 In advance of the 2020 Presidential election, “Kill Chain: The Cyber War on America’s Elections,” debuting Thursday, March 26 (9:00-10:35 p.m. ET/PT), takes a deep dive into the weaknesses of today’s election technology, investigating the startling vulnerabilities in America’s voting systems and the alarming risks they pose to our democracy. From filmmakers Simon Ardizzone, Russell Michaels and Sarah Teale, the team behind HBO’s 2006 Emmy®-nominated documentary “Hacking Democracy,” and producer Michael Hirschorn, “Kill Chain” follows Finnish hacker and cyber security expert Harri Hursti as he travels around the world and across the U.S. to show how our election systems remain dangerously unprotected.

The documentary exposes the vulnerability of our election system, how it has been affected, and how we are open to another cyber attack. It’s a frightening premise that isn’t out of a movie; it’s our real life.

Check out the trailer below. “Kill Chain: The Cyber War on America’s Elections” will be available on HBO On Demand, HBO NOW, HBO GO and partners’ streaming platforms.