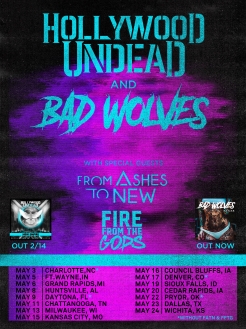 Hollywood Undead’s sixth studio album called “New Empire”, vol.1, will be released on Friday February 14th. The California group Hollywood Undead will be teaming up with rock heavyweights Bad Wolves for an extensive co-headline tour of the U.S. this spring.

The groups From Ashes to New and Fire From The Gods will provide direct support for select shows. The slew of dates runs throughout May with stops in cities along the East Coast, Midwest, and Southern regions of the country.

“We’re looking forward to this spring run with Bad Wolves. It’s been inspiring watching them evolve musically since the last tour, and we can’t wait to get back at it,”says Johnny 3 Tears (vocals, bass guitar).

Since the release of Hollywood Undead’s RIAA platinum-certified 2008 debut album, Swan Songs, the band’s distinctive and infectious music has incited a cult audience of millions of fans; The quintet, comprised of Johnny 3 Tears (vocals, bass guitar), J-Dog (vocals, guitar, bass guitar, keyboards, synthesizer, programming) Charlie Scene (vocals, guitar), Funny Man (vocals), and Danny (vocals, keyboards, guitar, bass), have garnered massive mainstream appeal, with their 2011 sophomore record, American Tragedy, going gold and hitting #4 on the Billboard Top 200 chart. Their 2013 full-length, Notes from The Underground, seized the #2 spot, and in 2018, Hollywood Undead crossed 1 billion total global streams across their catalog. Legends such as B-Real of Cypress Hill and Jonathan Davis of Korn have also jumped at the chance to collaborate with the boys over the years.

For Bad Wolves, the announcement of their co headline US tour with Hollywood Undead comes at just the right time – as the band’s current single hits the very top of the Active Rock charts. “Killing Me Slowly” is the band’s 4th consecutive #1 song at Active Rock Radio, and is the first single off of their sophomore album N.A.T.I.O.N, which reached #1 upon its release on the Top Hard Rock, Current Hard Rock and Billboard Hard Rock charts. Bad Wolves will also hit the road with Disturbed’s The Sickness – 20th Anniversary tour with other special guests, Staind.

The album is due out, this Friday, February 14 via Dove & Grenade Media / BMG. The record features fiery, high-energy tracks that reveal Hollywood Undead embracing a heavier, hard-rock sound with this effort, not to mention sharpening their signature sound to knifepoint precision on the nine songs, with guest vocals from Kellin Quinn (Sleeping With Sirens) on “Upside Down,” and Good Charlotte’s Benji Madden on “Second Chances.”

Tickets to all shows will be available for purchase on Hollywood Undead’s official website here.