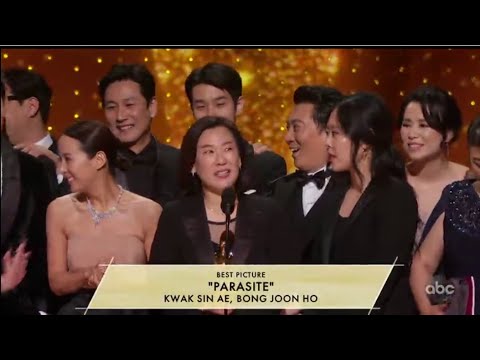 Listen, when we say Monday night’s Oscar was a feat, it definitely was a feat. No doubt about it, no questions asked.

It was a night of firsts, and some classic ones. A big one was that Kwak Sin-ae became the first woman of color to win an Oscar for Best Picture. The “Parasite” co-producer (she shared the award with Bong Joon-ho, who also directed the film) said in her acceptance speech, “I feel like a very opportune moment in history is happening right now.”

She could have meant that “Parasite” was the first foreign-language film to win the top prize at the Oscars, or that Joon-ho is the first Korean and international filmmaker to win the most Oscars in a night (four Oscars, to be exact, and he shares that honor with Walt Disney).

But we here at TILTED are taking that line to mean that Sin-ae knew what she was doing. She said what she said. She is the first woman of color to win an Oscar for Best Picture.