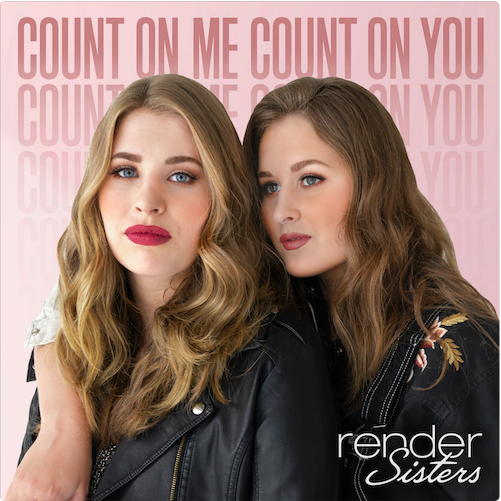 Sisters and best friends Mary-Keaton (16) and Stella (14) Render,an emerging pop-country duo from Arkansas suitably named Render Sisters, are set to release their harmonious second single “Count On Me Count On You” on Friday, September 18. The new song celebrates their special bond of sisterhood, and the connection they have with each other.

“This song is very special to us since it reflects on our relationship as sisters and the friendship we share with each other,” said Mary-Keaton. Stella agreed, saying “not only is this the first song we wrote together, it was the easiest song we have ever written because it is about our bond as sisters.”

Today, the Arkansas Democrat Gazette exclusively premiered a first listen of the new tune as part of their recent interview [click to listen/view] with features reporter Sean Clancy. Plus, the song’s video will exclusively premiere on The Heartland Network’s ‘Country Music Today’ show beginning on Wednesday, September 23 at 2pm ET/PT, along with their official YouTube channel. The video was shot on-location at their family’s row crop farm just outside of Pine Bluff, Arkansas.

“Count On Me Count On You” was co-written with accomplished Nashville songwriter Britton Cameron (Don Williams, Jon Pardi, Lonestar) whose been working with these young songstresses on developing their life’s stories into beautiful melodic harmonies.

“The moment I met the Render Sisters I could sense their maturity,” Pam Tillis recalled. “My unexpected moment came when I heard them sing “Lost Boy” and how easy they made it all sound. It was an intriguing melody that caught me off guard, with Everly-esque harmonies and simple but haunting lyrics. These gems in the rough from rural Arkansas don’t need much polishing, just more opportunities to do what comes naturally.”

Single Name: Count On Me Count On You
Release date: September 18, 2020
Label / Distribution: PCG Artist Development / Distro Kid
Written by: Mary-Keaton Render, Stella Render, Britton Cameron
ISRC: QZK6H2048399
Produced by: Britton Cameron
Buy/Stream/Listen at bit.ly/35Em4d4
Video: youtu.be/P4G9ZE5gMbU
Video Produced/Directed by: Josh Sikkema
About Render Sisters:
The Render Sisters are a young pop country duo from Pine Bluff, Arkansas who were influenced to become songwriters by their grandmother, a music teacher. Having graced as many small town stages since elementary school, these harmonious teenage southern songstresses are now ready to strike their own chords as original singers and songwriters, with their debut songs, “Lost Boy” & “Count On Me Count On You,” premiering summer and fall of 2020. Visit RenderSisters.com to learn more, or follow @RenderSistersMusic on social media.