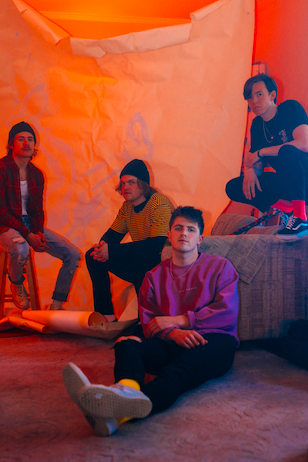 Based out of Nashville, Tennessee, one of rock’s most passionate and talented up and coming bands, Betcha, just released the visuals to their most recent single ‘July’ (produced by Nick Furlong).

“‘July’ is about accepting the highs and lows of life. One can’t really exist without the other. If we never experienced bad days, we wouldn’t be able to truly appreciate how beautiful a good one can be…sometimes it can be difficult to convince yourself that things are okay, that there doesn’t have to be a problem. “July” is our way of saying enjoy the highs, and if things happen to be low, good days will eventually come back around.”-Betcha

Directed by Joey Brodnax and shot at the band’s home in Nashville, TN, the colorful video succeeds in creating a playful summer vibe that complements the band’s alternative rock charm. ‘July’ follows the band’s previously released track, ‘If That’s Alright’, which was met with critical acclaim. As they continue to release hit after hit, the Nashville super-crew is bound to reach superstardom.

Betcha – Charlie Greene (vocals, guitar), Ben Booth (lead guitar), Taylor Dubray (bass, keys), and Chase Wofford (drums) – first united at Nashville’s Belmont University, winning a school-sponsored “Battle of the Bands” whilst still known as Wilder. Fueled by support from GRAMMY® Award-winning producer Jacquire King (Kings of Leon, Kaleo), the band recorded a series of demos that ultimately saw them signed to the legendary Atlantic Records roster. In 2018, they rechristened themselves as Betcha – an amalgamation of the first letters of each member’s name (Ben, Taylor, Charlie, and Chase) – and moved into a shared house in Nashville where they still hang out, writing, recording, and pushing their unique strain of music further than ever before.