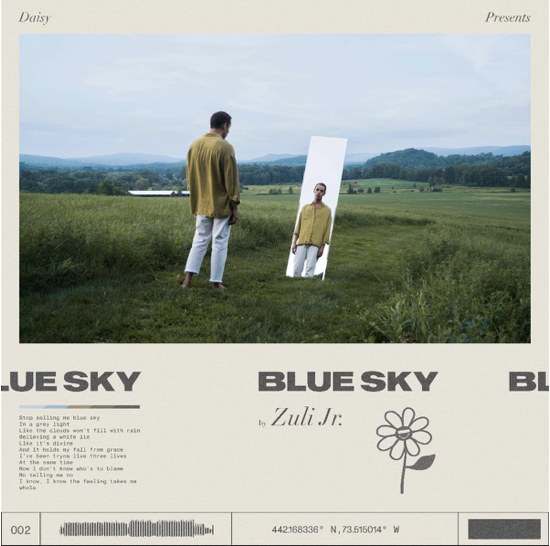 Rising indie R&B-pop artist Zuli Jr. has released his new single “Blue Sky” from his forthcoming studio album Stop it God., out May 14th via Nurtured Ideas. PRESS HERE to listen and PRESS HERE to watch the official music video, which first premiered with Ones To Watch alongside a Q&A. “Blue Sky,” the latest output showcasing Zuli Jr.’s silky and soulful falsetto, chronicles a breaking point within one’s self, with the New York-born and based singer-songwriter declaring, “stop selling me blue sky, in a grey light, like the clouds won’t fill with rain. Believing a white lie, like it’s divine, and it holds my fall from grace.” Stop it God. is available for pre-order now at all DSPs and each pre-order includes an instant download of “Blue Sky” and lead single “How to Feel,” which has been hailed “irresistibly-catchy” by UPROXX. PRESS HERE to pre-order; Stop it God. will be available digitally and on limited edition blue vinyl. Album, merch and bundle packages are available at Zuli Jr.’s official webstore HERE. Fans can also interact directly with Zuli Jr. by texting 917-708-7244.

“‘Blue Sky’ was written at my breaking point,” shares Zuli. “I was completely lost yet keeping up appearances on social media as if everything was better than ever. Losing my peace of mind, while trying to use likes and comments to fill a hole and reinforce my self-worth. The song and video reflects on this facade we all put on in one way or another. The perception of ourselves we put out into the world and embracing the vulnerability of actually being.”

Stop it God., the sophomore full-length album from Zuli Jr., is a symbolic representation of the self. The version we stare at day after day in the mirror vs. the version we upload online. The 12-track collection revolves around the fictional AI concept of Daisy, the ever-present corporate overlord with a HAL 9000-style computer that subconsciously informs the world around you and navigates daily life; it lies in the background only to entirely shape the foreground. Sound familiar? Zuli first introduced Daisy and this virtual world in the music video for “How to Feel” – PRESS HERE to watch. The album’s overall concept is tied into everyday technology and social media, with the songs written as a reflection on the creative being within us all and the modern world that leads us to believe we are at the center of it. Throughout Stop it God., Zuli Jr. touches on the spectrum of what we put our faith into and how we choose to cope and find meaning in our lives.

Recorded at an upstate New York retreat throughout late 2019 and early 2020 with close friends and collaborators Zach TK Zanghi and Aire Atlantica, who produced the album with Zuli, Stop it God. draws on inspirations as diverse as SZA, Radiohead, King Krule and The 1975. Crafting a story of his own, Zuli Jr. opens up a worm hole between future-facing pop, Platonic allegory, science fiction, and eerily parallel truths on Stop it God. From start to finish, the album plays as a deliberate statement on the human condition, yet open-ended and up for interpretation.

Named an “Artist You Need To Know” by Rolling Stone on the heels of his 2017 debut, Zuli Jr. continues his sonic evolution from indie rock to a soulful, R&B-leaning sound on Stop it God., which he first introduced via the summer 2019 single “ur mistaken.” Since the release of his debut album On Human Freakout Mountain, Zuli Jr. has amassed nearly 5 million streams, while receiving praise and support from the likes of Rolling Stone, Nylon, FLOOD, Culture Collide, SPIN, Earmilk, UPROXX, Popmatters and many more. His signature sweet voice has also been hailed “absolutely mesmerizing” from Atwood Magazine. Stop it God. marks the next chapter in Zuli Jr.’s ever-expanding and evolving career.